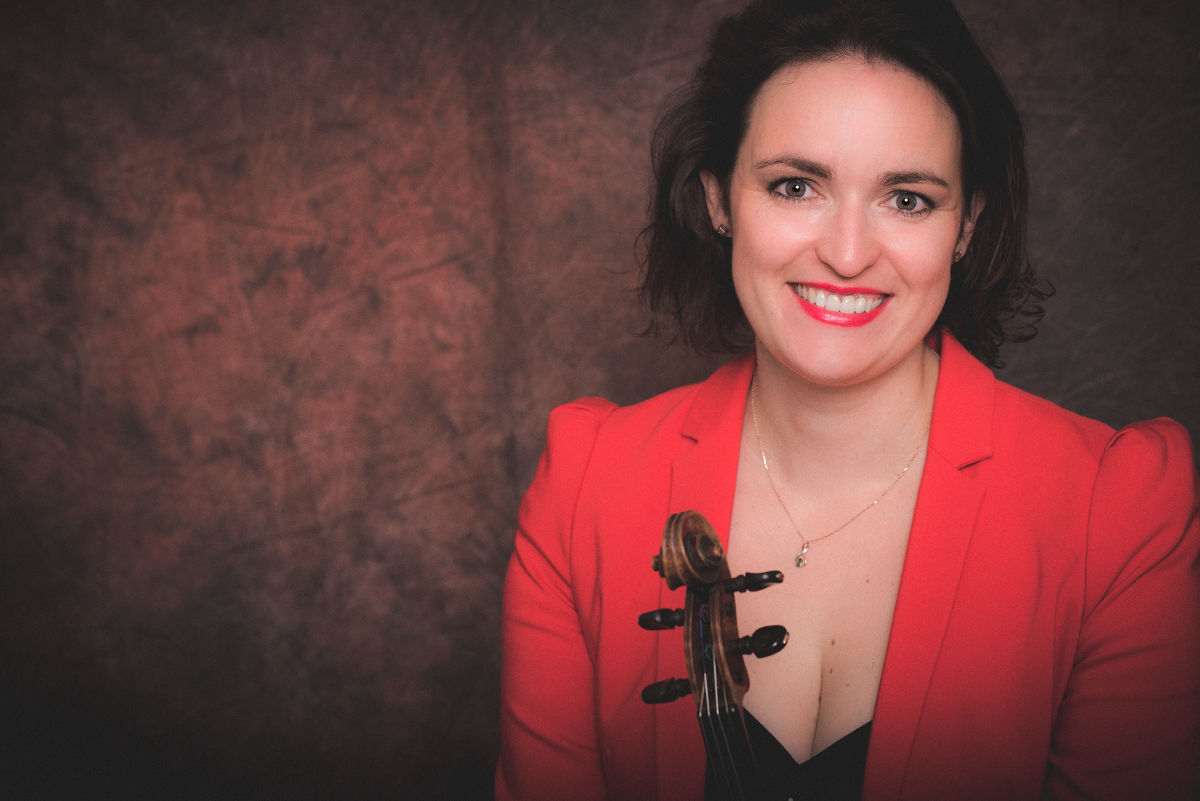 The unique Toccata Classics label has brought us much unjustly neglected music in its 100-plus releases and here is yet another eminently worthwhile CD of some superb music by the unfamiliar German composer Günter Raphael (1903-60).

A greatly gifted musician who suffered doubly during the Nazi period, he was wrongly accused of being half-Jewish and therefore beyond the pale, battling at the same time against tuberculosis, which disease finally carried him off at the age of 57. (…) In the absence of scores, I am more than prepared to take these performances by the young French violinist Pauline Reguig and her colleagues on trust. One can sense that these gifted artists play this music with obvious inner conviction. This is a fascinating and no doubt, in its way, important issue.

A general rehearsal in Rostock for the tour of Japan

Three exceptional musicians from the Rostock Hochschule für Musik und Theater (HMT) – the French violinist Pauline Reguig (26), the Russian cellist Alexey Shestiperov (31) and the Japonese pianist Yasuko Sugimoto (30) – have founded a Piano Trio. This was all the more notable as stable chamber music ensembles are rare in Rostock, and the Hochschule has also not been very productive in that respect.

Last May (2010) the three virtuosi performed the Mendelssohn D-minor trio at the HMT Mendelssohn Festival. Their obvious technical and aesthetic affinity led to their decision to establish a professional ensemble under the name “Bartholdy Trio”. One year later, the Trio was invited to tour Japan.

In the middle, though not at the centre of this concert, stood the Mendelssohn D-minor trio. It was preceded by the Beethoven Trio no. 1 and followed by the Shostakovich Trio no. 2. The Bartholdy Trio’s performance of these was disciplined and intense, demonstrating a sovereign technical accomplishment and musical intelligence, and a continual transparency which opened distinct stylistic horizons.

With this style of playing they offered a moving experience particularly in their mature interpretation of the Shostakovich Trio. The last movement was a small masterpiece in its desperate, almost menacing humour.

Their success in Japan is guaranteed, and they will bring honour to Rostock. It only remains to wish that these three stay together and purposefully develop their artistic potential.

The soloist concerts in the Katharinensaal, a cooperative event between the Norddeutschen Philharmonie and the Hochschule für Musik und Theater Rostock, are simply loved by the Rostock public. It is so because they offer – as though a prize – three solo concerti, when normally only one is performed in the habitual symphonic concert program. On this occasion it was Mozart’s Violin Concerto KV 207 in B major, Sibelius’s Violin Concert in d minor and the Sinfonia concertante for cello by Prokofjew.

Such programs are not only for the enjoyment of the audience but also as an educational necessity. Because today, when one wishes to play in a famous orchestra, one must have played a Mozart concerto. And when ones ambition is to play as Concertmaster then one must have learnt a concerto of such a standard as that of Sibelius.

It is surely a great advantage for the Rostock Hochschule that the school’s most talented students have the possiblity of giving such concerts with a professional orchestra. Here the young soloist is free to try out, to test out how far he can follow the orchestra and it’s devices and also how far he can go leading the orchestra himself.

The Rostock Philharmonie and it’s conductor Christian Hammer are experienced and skillful enough to give the necessary space and freedom to the soloist. (…)

The shining star was the french violinist Pauline Reguig (25) with the Sibelius Violin Concerto. It was more a performance of exemplary capability. It was a lyricism accompanied by accents essential to the style of the music, played with such a glowing passion that clearly enthoused the orchestra and indeed the public.

Piano and Violin: a Dynamic Duo

An evening of beautiful music was given last Friday by the 24 year old violinst Pauline Reguig and pianist Emilio Peroni. Reguig, born in Toulouse in 1984, has studied at the Rostock’s “Hochschule für Musik und Theater ” since 2002 and was awarded her Diploma in 2007 with distinction. Peroni was born in 1977 in Neuquén, Argentina. Since 2002 he has also been a student at the “Hochschule für Musik und Theater Rostock” and like Reguig is a multiple Prizewinner. For the publin in the Ferdinand-Trimborn-Saal, the duo decided on a round program beginning with the “Classic” Mozart and his Sonata in e minor.

Immediately one heard the lightness of tone in Reguig’s playing, typical of Mozart’s style. Lyrical legato and powerful forte passages were equally mastered. Her concentrated facial expressions gave the changes in character even more authenticity. Peroni proved he could elicit such a tone from the piano, that it could confidently compete with that of the violin. Often the two played unisono and arrived at an incredibly well balanced sound. It was after Schubert’s Duo in A major that the violin then had it’s grand entrance.
In Claude Debussy’s Sonata in g minor, Reguig convinced through intensely emotional playing that her instrument could indeed speak. In the Allegro vivo, every note was meaningful, a soft glide to the highest notes and surreal tonal worlds captured the listener, who would have gladly applauded the first movement.

Experimental and expressively interpreted was the second movement as the duo impressed the audience with an exact understanding of each other. Reguig demanded absolutely everything from her instrument as she stroked, plucked, and even pulled away broken hairs from her bow. After a moving and emotional “Finalé très animé ” there was tremendous applause for the artists.

The sonata by Brahms constituted another very conderful moment of the evening. The two artists played the Allegro in a tragic and moving tonality. It’s with pleasure, that one could follow the long musical phrases that developed and reached their target. In the dynamic finale, Pauline and Emilio solicited all the capacities their instruments could offer, and such was the applause that the duo gave an encore of the first movement from Beethoven’s first sonata in D.

Diploma with Debussy and Brahms
The Prizewinning Violinist Pauline Reguig gave her Examination Recital in the HMT Rostock.

Having won first Prize in the Felix-Mendelssohn Competition 2007, a prize given by the Foundation of German Music Schools to advanced students studying in Germany, the french violinist Pauline Reguig (22) gave a recital in the HMT Rostock. This recital was also her Diploma concert exam.
These public conert exams, when performed at such a high standard as this one, are certainly no internal school matter, rather that they raise the level of chamber music performed in Rostock and indeed the level of the Students themselves.

Pauline Reguig has been a student in the class of Petru Munteanu since 2003, and though not always to be seen in the limelight, when she takes her place, she sets the stage alight with her virtuosity and her individual musicality. And it was exactly this intense muicality that she portrayed in a concert with an unconventional programme.

The concert began with the force and might of the technical and wondrous interpretation of Schönberg’s Fantasy for Violin and Piano op.47.
She astoundingly mastered the technical requirements – fierce changes of position, harmonics as well as disaparate changes of tone and colour – and still played with an understanding of the foreign muscial grammar of the 12 tone scale.

The following Sonata written by Mendelssohn at age 16, she played with her chamber music partner, pianist Emilio Peroni. The duo portrayed the romantic longing and beauty not forgetting the sense of underlying danger.

In the Recital’s second half, accompanied by Liga Skride, the ensemble arrived at a musical, natural awareness through musical differences resolved by the clarity of their emotions. Firstly with the Violin sonata by Debussy played with a rich tonal colourspectrum. Finally was the in the third Violin sonata op.108 by Brahms, in which she found the romantic shadow, played with passion and strength while never being brusk or harsh.

(…) The highlight of the evening was the performance of two solo concerti with orchestra. The first for the wonderful tone of the wind instruments, and the second for the poetic ideas of Schumann’s concerto, performed perfectly by the the virtuoso violinist Pauline Reguig. She entered the d minor concerto not only completely naturally after the orchestral intoduction but also harmonised fantastically with the different voices and melodies with in the orchestra. (…)

(…) Simply reading the Program of the afternoon’s concert, one could forsee the joys that was awaiting. The ensemble of sonatas for violin and piano by Mozart, Debussy and Johannes Brahms, performed by the violinst Pauline Reguig and pianist Emilio Peroni, surpassed perfection. With these two Interpreters a critic could truly lavish superlatives on it. All in all, a perfect duo. One with charisma and brilliant technique, finely phrased playing and virtuosity, playing that left the audience simply astounded. (…)

(…) D.K (Violin) mastered the Brahm’s Hungarian Dance No.1 in g minor with bravour but could have done even more in terms of rubato and agogic finesse. It must be said that the relationship between the orchestra and soloist was not quite as distinct as with soloist Pauline Reguig as she performed Mozart’s Adagio in E major like an opera diva. As a collective the “Concertino Ensemble” produced well balanced sound. In weighted rhythymic passages, the Violin’s tone softened the fragile lustre, iridescent like a soprano. In the C major Rondo, she sparkled even in turbulent passages and conveyed an internal serenity.
Technique and emotion were fused also in the Efrem Zimbalists Fantasy on the opera the “Golden Cockerel” by Rimsky Korsakov. Here Reguig mastered with solistic brava changes of colour, rythmic changes, fiery glissandi and harmonics always played with a lustrous sonority.